The question below originally appeared on Quora.

Bradley Voytek, an NIH-funded post-doctoral neuroscience fellow at University of California, San Francisco studying human cognition (namely working memory and attention), explains how play is more than just fun.  It has a profound neurological impact, from thickening the neocortex to enhancing an animal’s ability to learn and problem solve.

Why does the brain crave entertainment?

There is a reason that young mammals play and frolic.

Lion cubs and wolf pups at play are learning motor skills. They’re learning how to hunt to survive. 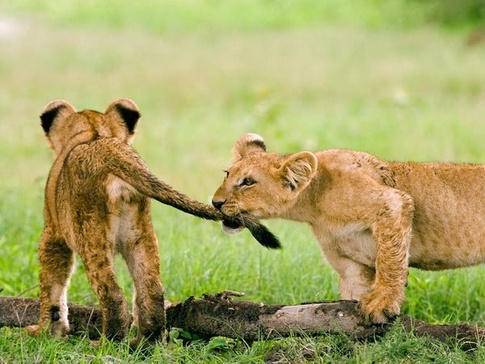 Classic research from the 1950s by my friend and Berkeley teaching mentor [1] Marian Diamond proved that mammals raised in “enriched environments” (with toys, running wheels, etc.) had less neural death (or more neuronal growth) in their brains. They learned better, were healthier, etc.

I’ll just let Dr. Diamond tell the her own story (via the Society for Neuroscience History of Neuroscience Autobiographies [2]):

It turns out that the Hebbs allowed their children’s pet rats to run freely around the house, and this gave Hebb an inspiration. After a few weeks of free roaming, Hebb took the rats to his lab to run mazes and compared the results with maze-running by rats living in laboratory cages. Interestingly, the free-ranging rodents ran a better maze than the locked-up rats. Hebb speculated that rats conﬁned to small unstimulating cages would develop brains worse at solving problems than animals growing up in a stimulating environment like a large house with hallways, staircases and human playmates.

From Hebb’s observation the Berkeley team got the idea of deliberately raising baby rats in two kinds of cages: a large “enrichment cage,” ﬁlled with toys and housing a colony of twelve rats; and a small “impoverished cage,” housing a solitary rat with no toys. Indeed, the rats growing up in a deliberately enriched environment ran better mazes than the “impoverished rats” raised in unstimulating conﬁnement. And like the bright and dull rats that Krech and his colleagues had already tested, the deliberately enriched rats had more of that particular brain chemical, acetylcholinesterse, than the impoverished rats. This time, however, it was apparently nurture at work, not nature…

The research process involved removing the brain of a laboratory rat, chemically ﬁxing, or preserving, the brain tissue andmaking thin slices of it (20 micra thick), viewing the slices undera microscope, then very carefully measuring the thickness of the cerebral cortex from the rats raised in both kinds of cages, enriched and impoverished. I did see variations: The enriched rats had a thicker cerebral cortex than the impoverished rats, but the difference was not the sort you could observe casually. You had to compare the brain tissue under the microscope, and the cerebral cortex of the enriched rats was only 6 percent thicker than the cortex of the impoverished rats. Nevertheless, it was highly statistically signiﬁcant; nine cases out of nine showed a 6 percent difference. This was the ﬁrst time anyone had ever seen a structural change in an animal’s brain based on different kinds of early life experiences. Could it really be true?

I took another year and repeated the experiment with nine more animals. Then I started to get excited. It was about 1963 by then, and my life was really hectic. I now had four children, Catherine, Rick, Jeff, and Ann and was only at the university half time, doing demanding, pioneering work in the lab. In some ways, that period is hard to recall. But I do remember very clearly the day I took the results over to show David Krech. I ran across campus with the papers in my hand and laid them out on his desk. He stared at them, then at me, and immediately said, “This is unique. This will change scientiﬁc thought about the brain.” It was a great thrill—truly an emotional high—to sit with him and share that moment.

In 1964, we published the results in a paper by Diamond, Krech, and Rosenzweig called “Effect of Enriched Environments on the Histology of the Cerebral Cortex.” And a year after that I found myself standing in front of a session on the brain at the annual meeting of the American Association of Anatomists.

We were at a hotel conference room in Washington, D.C., and I was truly scared. There were hundreds of people in the room—very few of them women—and this was the ﬁrst scientiﬁc paper I had presented at a big conference. I explained the projects as calmly as I could, people applauded politely, and then—I’ll always remember this—a man stood up in the back of the room and said in a loud voice, “Young lady, that brain cannot change!”

It was an uphill battle for women scientists then—even more than now—and people at scientiﬁc conferences are often terribly critical. But I felt good about the work, and I simply replied, “I’m sorry, sir, but we have the initial experiment and the replication experiment that shows it can.” That conﬁdence is the beauty of doing anatomy. Ed Bennett used to say to me,“Marian, your data will be good from here to eternity, because it’s based on anatomical structure.” Eternity is a long time, of course. But so far—and it’s been thirty-four years—Bennett has been right. And the man in the back row? My entire research career and some of the many scientiﬁc ﬁndings that stemmed from it will continue to show how wrong he was in the pages ahead….

We know that this applies to humans to some extent, too. For example, even briefly practicing a new skill, such as juggling [3], can increase your motor cortex grey matter volume. Practice and play is most certainly good for the brain.

I don’t have the time to hunt around right now, but I’d be shocked if there wasn’t a whole wealth of academic research looking to the evolution of playing behaviors and their role in species fitness and survival.

My guess is the running theory would be something like this:

Note that so far I’ve only focused on physical play. But humans, being the social primates that we are, also find social practice entertaining as well. It’s good for us to practice socializing and learning social structures in low-cost scenarios, so we watch TV, read books, go to performances, chat online, play multiplayer videogames, and so on.

We interpret the observations of social interactions or the simulation of social behaviors as “entertaining”. But what we really might be doing is practicing how to interact with one another in a low-cost setting.

You don’t want to piss off king monkey or your future possible offspring supporter when you only get one chance in real life.